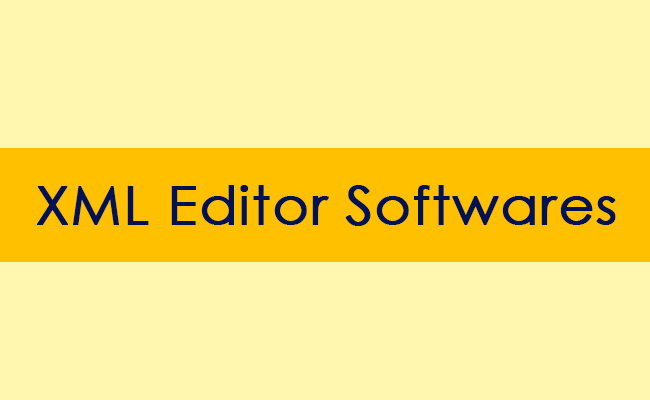 XML Editor Softwares: Extensible Markup Language, better known as XML, is a very simple yet powerful markup language. With the ability to encode documents to make them machine and human readable, this language is extremely popular with web designers and often forms the foundation for web documents such as RSS. There are several XML Editor Softwares ( Extensions ) out there in the market that allow you to edit these files. Below are five of the best editors that developers around the world have found to be user-friendly.

Known to be a really fast validating XML Editor, XML Copy Editor is ranked among the best XML software out there. It saw its inception in 2005 and has gone through several updates since them. This editor works on Windows and Linux platforms and is available in 10 different languages. XML Copy Editor is known for its stability, compatibility and relatively few bugs and errors, if any.

Another powerful XML editor, Oxygen goes beyond the basics to include powerful debuggers and profilers for advanced coding requirements. It supports all XML schemas and XML based technologies, and is highly rated by developers across the globe. Oxygen XML Editor works as a standalone tool or as a plugin, and includes a fully-functional free trial so that you can try out every feature before you decide to purchase it.

Are you relatively new to XML? Well, if you are, Easy XML Editor is your friend! This comfortable editor makes the job simple for you with its simple yet powerful features that truly deliver. Table editing, syntax highlighting, copying, finding and replacing and tool modification are just some of the features that are included in this deceptively simple power-packed free XML editor.

A jewel in the crown of XML editors, Peterâ€™s XML Editor is a powerful free tool with a wide range of features that cover everything youâ€™d need, irrespective of whether you are a novice or an advanced developer. It includes a comprehensive help file that takes you through every feature such as validation and tree view.

Including conversion utilities, built-in templates and database integration, Altova XML Editor is perhaps the best XML editor out there in the market. Powered by RaptorXML, this neat editor includes a host of features that are perfect for advanced XML editing and development. Global resources support is an added plus for users of this editor, which includes a fully-functional free trial so that you get to experience the full potential of what you are investing in.